AND MRR LOVES MEECES TO PIECES!

Have you ever considered adopting pet mice? Many whiskered cuties need homes RIGHT NOW. Adoption fees are $10 for one mouse or $15 for bonded pairs. Fees for neutered male mice and harems TBD.

On October 29, The New York Times posted an article about 70 white mice trapped in an “art installation” in Manhattan’s Castle Fitzjohns Gallery. Each was contained in a clear plexiglass box, set in the floor like tiles. The artist, Mr. Joseph Grazi, said this was designed to explore phobias and social isolation caused by the internet. 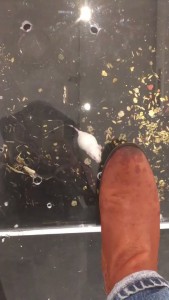 The problem is that mice are prey animals and hard-wired to be terrified of anything above them, even a shadow. So, they froze or shivered in fear for weeks as children played hopscotch, boots clomped overhead, and their plexiglass structures creaked. When the museum was closed for the night, misery replaced terror as these poor nocturnal creatures lived without friends or toys and nothing but a bit of wood and some dry chow to chew and a tiny bowl of dirty water. As internet complaints grew by thousands and complaint calls came from as far as Europe, Mr. Grazi justified his actions because the mice were just “feeders” destined to be eaten by reptiles including his own pet ball python.

Empty Cages Collective or ECC, a Manhattan animal rescue, had arranged for the mice to be surrendered at the gallery. But apparently to avoid further in-person conflict, the artist closed the display 2 days early and took the mice home. He threw them all in his bathroom together. By the time ECC was allowed access, of the original 70, only 59 remained, with the fate of the missing unknown. Several males were sick with respiratory issues and one so hurt by his crowded peers he had to be sedated for treatment. Most of the 37 females were or became pregnant during those two days. Mainely Rat Rescue stepped up to help ECC by taking in some of the mice to foster, heal with love, and adopt to forever homes. Meanwhile, new litter after new litter was born.

Foster homes and adoptive homes are badly needed. Are one or more of these tiny beauties in your future? Mice of all ages are available, rehabbed in loving MRR foster homes. No experience with mice? No worries—we are happy to provide guidance and suggestions along the way!

We also need funds to offset the costs to care for all the mice. Both ECC and MRR are 501(c)(3) nonprofit organizations, and donations are fully tax-deductible to the extent allowed by law.